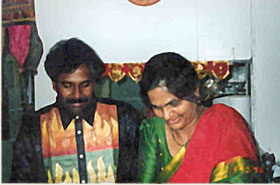 Srees food is based entirely on fresh and natural ingredients, and the menus are planned to provide balanced meals. To keep the food low in fat and cholesterol, no butter or animal fat is used. Sree and Vydehi are both interested in health and nutrition; Sree is a biologist who received his Masters degree in India 1981 and performed oncology research at the Pittsburgh Cancer Institute at UPCM and Mercy Hospital before turning restaurateur; Vydehi, after finishing her B.S., attended the Cultural Academy in Madras, where she studied cooking, nutrition and household management.

The Srees started the restaurant because Vydehi loves to cook. After working for a short time as a marketing manager, dealing with too much paperwork and travel, she told Sree, "No way I'm going to do that job. But I don't mind cooking for 12 or 16 hours." So she did, and so she still does.